I was lucky to be able to attend the All Write Conference last week. In his session, Ralph Fletcher (amazing!) talked about a teacher who used one of his (Ralph's) poems to get his students writing poetry.  He spoke about how he wasn't sure about that idea but how he was surprised at the great poetry that came out of it.  He put his poem on the screen and asked us to write a poem of our own, using his as a mentor text.  Internally, I panicked just a little!  I don't write well on the spot and I don't generally write well in a room full of people!  But, when Ralph Fletcher asks you to write, you write!  I took a deep breath, I reread his poem (for the third time) and put my pen on the paper.  I was surprised with what my pen wrote!

Scrambling to put on bathingsuits
Racing to jump in the lake

Each with our own innertube
We'd swim for hours

We'd drag ourselves, exhausted
From the cool water

With stuffed bellies and heavy eyes
We'd sit around the bonfire

We'd stare into the dancing flames,
Listen to the stories of lives around us

I still can't imagine
Anything better than that.


I've also been participating (somewhat) in the Teachers Write camp this summer.  I've found that sometimes I can connect with the writing prompt and take off and sometimes I can't.  I've decided that it's ok though!  When I don't connect with the prompt, I just write my own thing!  It works for me...the point is just to write!

Yesterday, I loved the Teachers Write prompt about doodling.  I tried very hard to get into it.  I believe in the idea, I embrace the idea in my classroom, I wanted to try it yesterday.  I sat with my notebook and stared at it.  More.  More.  More still.  I closed it.  Later I tried again...I ended up making doodle pictures in the margins next to the poem.  Instead of the doodles getting me started with my writing, yesterday it ended my writing.  I guess that works sometimes too! 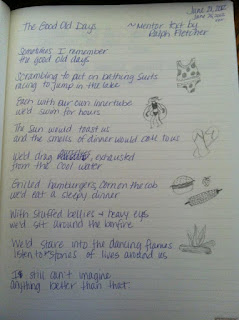