Book or Poem...That is the Question

I have been putting a lot of focus on nonfiction reading and writing lately in my kindergarten classroom. My students just pour over the animal books...the farming books...the car and tractor books...all of them!  The also had a really good time taking a cue from nature and our playground and writing poetry.  So, logically...my next thought was, hey, maybe we should write nonfiction poems!

Next, I told my students that I wanted them to choose something to write about; either something they already knew a lot about or they could pick something they wanted to learn about.  I told them to think about the poems we had been reading and the books we had been looking at.  Next, I called each one over to my "secret talking spot" and privately asked each child what topic they had selected to write about.  I wrote them all down and told the kids to keep their topics a secret until tomorrow...I didn't know if they could do that or not but I figured they could at least last the few minutes until I had the chance to talk to each one of them.  I just didn't want everyone to choose the same topic just because a friend picked it!  It worked!  I had a small handful of boys who all chose to write about sharks, but they have all been genuinely interested in sharks since they first laid eyes on the books I have in the room, so I figured that would be ok.  Everyone else picked different topics.

After school that day, I consulted my own classroom library, the school library and my collegue's library in order to find a book or two for each child on his/her topic of choice.  Again...another success! I found some great books!


The next day I told the kids what I had in mind and they were dancing in their seats; hardly able to wait to get their hands on the books I had carefully selected for them!  I passed out their books, their topics revealed to their friends, and we set to work.  My little sweeties spread themselves out around the room...laying on the floor, curled in the bean bag chairs, sitting at tables, lounging on the rug.  They had their research books open and their notebooks open.  They had their pencils at the ready and they dug in for all they were worth.  I'm not sure I have ever heard the quiet buzz that developed in the classroom that day.  They were all engaged in reading their books, writing down things they learned in their notebooks and sharing the best stuff quietly with the person next to them.  It was just amazing!  Take a look! 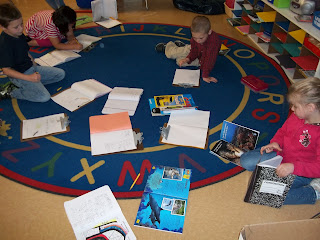 Our next step would be the writing portion.  I debated long and hard about whether I should ask them to try to write a nonfiction poem or a nonfiction book about their topic.  Choice won.  I told the kids that I wanted them to use their research from the day before to write about their topic but I let them choose whether they wanted to write it in poem form or book form. Most of them picked book form, but a few brave little souls picked the poem form.﻿

Again they draped themselves around the room and again they spread out all of their precious materials...there were kids, reading books, notebooks, booklets and sheets of paper from wall to wall.  It was glorious!  Here are just a few works in progress: 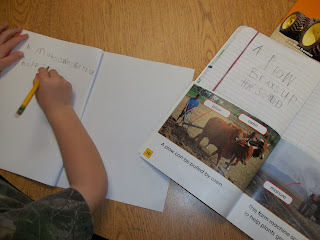 H is writing about farming. 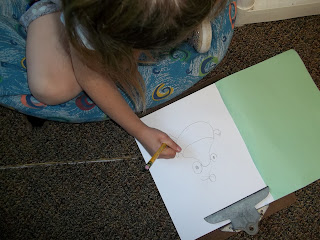 R is writing about frogs. 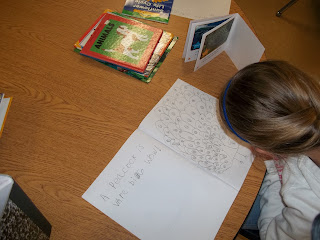 M is writing about different animal coverings.  Just look at that peacock! 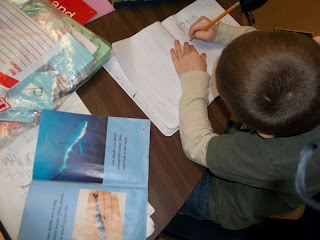 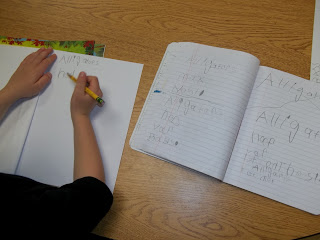 They worked hard during our writing workshop time and when I announced that it was time to clean up, many stunned, worried faces turned to look at me.  They had no idea they had been working for so long!  I reassured them that they would be able to finish the next day and they carefully put away all of their materials.

I'll post their writing next week when they finish!  I'm looking forward to it!
Posted by Robin at 3:04 PM