In my last post, I began the story of my kindergarten students' poetry journey.  Last time, I shared the prewriting process, taking a walk around the playground and writing a picture/word list of the things they saw, and then the beginning writing stages when they began to take those lists and turn them into poems.  Click here to read the full post.

After the kids created their poems in their notebooks, I asked them to come read them to me.  I was so excited I could hardly contain myself while I waited ever so patiently to hear their poems.  I very calmly sat at my table with my laptop and invited them to come over whenever they were ready.  And so it began!  They came over one by one and began to read.  I sat there in a state of awe and typed until my fingers hurt.  They finished reading my their poems and then went straight back to their private workspace and began to write more!  What?  Most of my sweeties wrote two or three poems!  Some spent some time illustrating their poems.  Some went back to their lists and drew some pictures to go with their words.  It was quiet, they were working hard, they were smiling, they were enjoying themselves!  AND SO WAS I!!!

Later that afternoon, I printed out their poetry.  I shared it with a fellow teacher and we celebrated together!  I shared it with my classroom helper (who wasn't there when we were writing) and we got a little misty-eyed as we talked about what special things the class had done.  There were definitely some surprises!

Here are some of the typed poems: 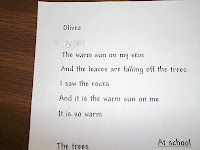 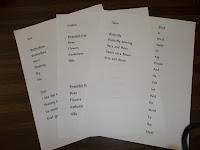 The next step was to figure out how to have the kids share their work with the class to celebrate together.  I decided that I would have the kids pick their favorite poem and then we would share that one with the class.  We will go back and share the rest another time.  I went the easy route and used the document camera for the presentation of their work.  I put each child's poem on the document camera and we read them.  We celebrated the interesting things the kids included in their poems.  My little rockstars noticed alliteration, onomatopoeia, repetition and interesting words in their classmate's poetry.  They made positive comments, they clapped, they smiled, they laughed and they encouraged each other.  It was amazing!

But, it was all going so well, I couldn't just stop there.  So...it was time to illustrate.

A couple of weeks ago, I had taken a big step for myself and used one of my poems with my students.  I didn't tell them at first that I was the author, but I put myself out there.  In order to show them how we could illustrate our poems, I pulled my butterfly poem back out.  Read it here.  I read it aloud again and we started talking about what I could draw that would best illustrate the poem...an easy task considering they did the illustration work for this poem last week!  Next, I taught my students how to use a black marker to draw an outline for a picture and then use watercolor paints to finish it off.

After they knew the basics, we spent a long time talking as a class and then with a buddy to decide what would be important to include in their own illustrations.  Then we got down to work with our markers and our watercolors.  Here are a few samples: 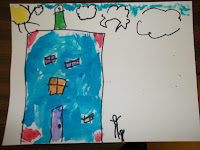 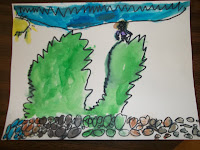 They were all so awesome I was just blown away.  Now, my students love art and projects of any kind, but the amount of time and care and concentration that went into these works of art was just phenominal!  Way beyond their usual work ethic.  They were putting their little hearts and souls into their work; a teacher's dream!

What's next?  Well, I think it's time to create a hallway display, don't you?  I'm planning to mount their pictures and poems side by side on black paper.  I also think this project is worth laminating because I can't imagine a parent out there that won't want to keep this project around for a long time.  Come back soon to see how we wrap up this project and what we are starting next.  Oh the places we will go and that plans that I have for them!!!!
Posted by Robin at 10:52 PM