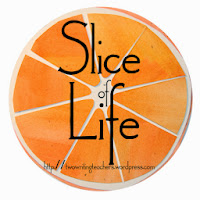 Today was a pretty typical day at school.  I did my thing, I packed my bag, rounded up my own children and ushered them to the car.  It was a rare 70 degree March day in Michigan and I was ready to go home.  I was looking forward to putting the windows down a bit and getting some fresh air.  I was looking forward to getting out of my school clothes and into something more lounge-worthy.

As I crested the hill I could see that the driveway at the end of the cul de sac was empty.  This means that we beat my hubby home from work today.  I sent my oldest into the house to leash up the dogs and take them outside, a task he isn't too fond of at the end of the day.  The three girls went in ahead of me.  I immediately heard the dreaded words.

"Dogs! What did you get into?" Yelled my feisty 4 year old.

"Uh, mom? You aren't going to believe what they did this time!" warned the two older girls.

"What did they do?" I asked, mentally running through the list of possibilities.  Chew another toy? Find a stray shoe? What did they do to the couch? Someone have an accident on the floor?

"They got into the cupboard again!" scowled my sweet and sassy seven year old.

I turned the corner and tried to take in the scene.  To the right, the pantry doors stood open, the kitchen rug was laying in a heap in the middle of the room, and one child was indignantly trying to figure out who forgot to put the rubber band on the doors this morning.

You see, this pantry entry has been a bit of a nasty habit.  We used to keep the dog food bag on the floor of the pantry.  After finding the doors open and the dog food bag chewed and torn open, we stopped keeping the food there.  It is now safely located on the top shelf.  The trash has a lid on it and so far...knock on wood...the dogs either haven't figured out how to get into it or they haven't noticed it there.

Today, the dogs aimed a wee bit higher and managed to get two bags of chips from the second shelf.  They dragged them into the family room, made themselves comfy on the new rug in the middle of the room, and proceeded to chew on the clips until they could get them off the bags.  There were chip pieces and crumbs from one end of the rug to the other, along with the remnants of the bags and clips.

Apparently, after a nice snack of chips, dogs feel the need to go to the bathroom.  Now, we have two young dogs who are home all day alone.  We, even at one and two years old, leave them a puppy pad for those days when they just can't wait.  No big deal...when they keep it on the pad.  Normally they do, if there is any accident at all.  Today?  Of course not.  I'll just let you imagine the rug for a minute...chips and poop...nice, right?

After a few choice words muttered under my breath, I grabbed the dustpan and broom and got the biggest pieces of chips cleaned up.  I grabbed some paper and picked up the less desirable pieces on the rug.  I gathered the blanket that we keep over the couch while we are gone and began to fold it.  Guess what I found then?  Yep, one of them peed on the floor and the blanket was laying in it.

Oh, this just keeps getting better and better, I thought.  There may have been a couple more words said in the heat of the moment and out of earshot of the littles.  I wiped up the mess and gathered the blanket and took it downstairs to be washed.  I vacuumed up the rest of the crumbs just as the dogs came back inside.

Remember, it's 70 degrees and beautiful outside.  Three little girls were in their rooms putting on shorts and preparing to head outside to play.  My son immediately went upstairs to do the same.  I grumbled at the dogs as I began to put away the paper towels.  I was just unplugging the vacuum when I heard the first girl yelling.

"The dog just puked on the couch in the living room!  Mom, come quick!"

At this point, I wanted to go back to school.  Or under a rock.  Or just about anywhere else.

I grabbed the paper towels and ran to the living room.  I guess it's clear which dog is the main culprit now.  I sent my son back outside with the dog in case she got sick again.  Luckily, the majority of the mess landed on a throw blanket.  Unfortunately, there was a pillow corner and a small spot on the  [brand new] couch that wasn't so lucky.  I gathered my wet, soapy cloth and dry towel and began to clean the couch.  I gathered the SECOND blanket and carried it downstairs.  I went ahead and started the washer this time.  As I reached the top of the stairs son was calling me.

"She isn't getting sick or acting like she's going to.  Can we come back inside?" he asked.

Not more than 2 minutes after coming back inside, this dog jumps up on the couch (the old one in the family room this time) and pukes again.  Kindly, she managed to do it in the crease between the two cushions.  Yes, that means two cushions got it AND the two pillows that were standing on top of them.

It's this moment that my hubby decides to call and tell me he's on his way home.  So, as I scrubbed the SECOND puke stain off the couch and pillows, I explained to him what the dogs had been up to on this fine day.

Twenty minute later, just moments after I was finally finished with all the cleaning, he arrived.  After getting all the fun details about my adventures and after I had the privilege of cleaning up yet another puke mess on the floor, he looked at me and said the magic words.

And all was right with the world again.

Except for the dog.