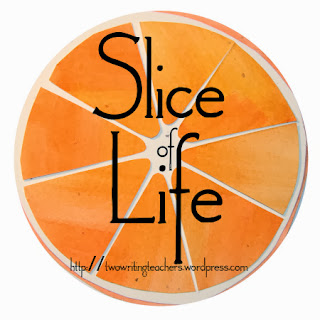 Today we had an after school party at school. Two of my girls participated in the party.  While they partied, I hung out in my classroom and did some planning for next week.  I had a couple of nice moments as the party unfolded.

He waved to me from across the room with a shy smile.  He was in my class two years ago and was possibly the most challenging student I had up until that point in my then 13 year teaching career.  I wondered if he would come over and talk to me or if I would just get the wave.  I didn't have long to wait to find out that answer.  About 30 seconds later he was standing behind my desk next to me.

Him: Mrs. S, look at the sticker I got in that other room!
Me: Awesome! Spider-man!
Him: He's my favorite super hero, I mean, him and Batman and the one with the red eye but I don't remember his name but he's on Teen Titans Go too, and I like them all the best, but Spider-man is my favorite one mostly.  (whew!)
Me: Spider-man is pretty cool...I like him too!
Him: Yeah, I like them all.  Did you know I have all the superhero movies? We get them as soon as they are done editing them and we have them all on disc.  I watch them online sometimes, but my dad has to help me with the wifi because I haven't gotten into wifi too much and I still need a little help with it sometimes.
Me: Me too, buddy, me too.

They tumbled into the room all out of breath like they'd just been running a hallway race.  They smiled and waved and called their hellos to me before going about the business of making a craft.  The high school helper sat at the table with them and gave directions.  They happily followed them and got right to work on their craft.  As they worked, conversation unfolded.

Tap, tap, tap. I felt her finger tapping my arm at just the same moment as I heard her voice trying to get my attention.  She gave me her biggest smile and a happy wave.  She had come in to make a craft but she had no idea what the directions were and even though the helpers were trying to explain to the small group gathered around the table, it meant nothing to her.  You see, AR is deaf.  Luckily, I was able to sign enough of the directions to be able to tell her what to do.  Still, no one noticed that she wasn't listening and following directions in the same way as the other kids...or that she didn't say anything. It made me a little sad for her, remembering that she faces that challenge every day of her life, but I was very glad I was there to help when I could.